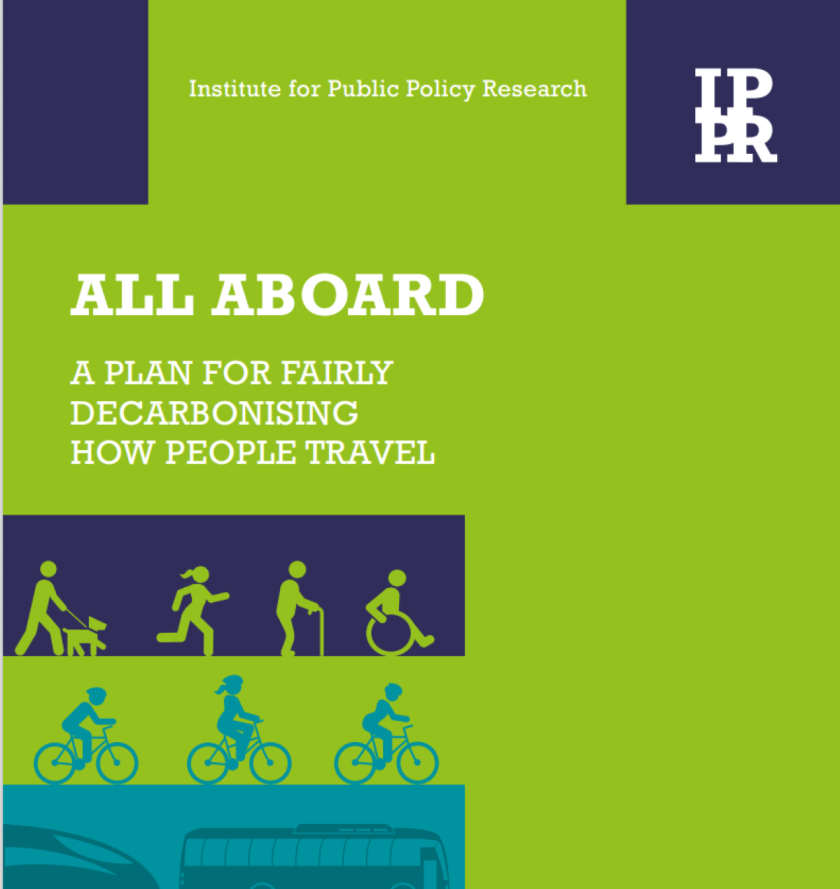 Policymakers are too focused on the shift to electric vehicles and must broaden their thinking if they are to deliver a fairer transport system and achieve greater wellbeing, according to a report published by progressive think tank the Institute for Public Policy Research (IPPR).

The report, entitled All aboard: A plan for fairly decarbonising how people travel, sets out the IPPR’s vision of a future with far more affordable clean transport options that can improve people’s health and wellbeing, while providing a better environment for nature and access to an electric vehicle for those who need it.

As well as analysing existing data and research, the IPPR also turned to a series of “citizens’ juries” throughout the UK to garner views from a cross-section of the public, with a high level of consensus in favour of a more sustainable approach that de-emphasises the privately owned car and improves accessibility to alternatives.

The two juries that deliberated on transport were in South Wales and Thurrock in the South East of England. The report notes that although the two areas represent very different parts of the UK, with different contexts to consider and a wide variety of life experiences, they came to remarkably similar conclusions.

The summary of recommendations on “travel and place” from both juries stated:

It’s about the availability and affordability of public transport. Plain and simple.

Member of the Thurrock Citizens’ Jury

Both juries prioritised action to improve public transport, with network coverage, hours of operation and cost at the top of the list. One juror from Thurrock commented: “It’s about the availability and affordability of public transport. Pure and simple,” while a juror from South Wales said: “They finish at stupid o’clock in the evening; in some areas they don’t get the buses.”

The IPPR report referenced a number of Scottish policies and initiatives as examples of good practice that should be applied elsewhere in the UK. These included the Scottish government’s commitment to mobility hubs, where users can access various types of transport from one place, as well as the principle behind 20-minute communities, whereby everyday needs should be accessible within a 20-minute walk, cycle or public transport trip.

Scotland’s Energy Saving Trust, which provides grant support and interest-free loans for switching to low-carbon transport and energy, also came in for praise, with report recommending that the UK government should announce a similar scheme.

However, the report criticises slow progress on the part of all the UK’s national governments and points to a major funding disparity. While Highways England is investing £27.4 billion in road building, only £2 billion is committed to active travel and £3 billion to a “bus revolution”.

Noting that little progress has been made in cutting transport emissions over the past three decades, Luke Murphy, head of the IPPR Environmental Justice Commission, said: “The government’s current preferred strategy places an overwhelming focus on the shift to electric vehicles. While superficially attractive because of its offer of continuity, such an approach will not deliver for people or planet.”

“We need to massively expand the provision of and affordability of clean public transport options, such as trains, buses and trams, while helping more people to regularly walk and cycle, alongside a shift to electric vehicles for those that need them,” he added.

The core sentiments of the IPPR’s citizens’ juries were reflected in the transport findings of Scotland’s Climate Assembly, a representative group of more than 100 citizens brought together to consider and deliberate matters associated with climate change and report to the Scottish government. Their report was submitted to the Scottish Parliament on 23 June.

Implement an integrated, accessible and affordable public transport system and improved local infrastructure throughout Scotland that reduces the need for private cars and supports active travel.

The members of the Climate Assembly deliberated a wide range of climate-related topics ranging from homes and buildings to business and taxation as well as education and the circular economy. Under the heading of “public Transport”, the Assembly wanted public transport to be cheaper or even free, urging the government to focus subsidies into nationalised public/private partnerships or not-for-profit providers. It also proposed standardised smart ticketing across the whole of the country, dubbing it an “Oyster card for Scotland”.

The topline statement agreed by 93 percent of the assembly is: “Implement an integrated, accessible and affordable public transport system and improved local infrastructure throughout Scotland that reduces the need for private cars and supports active travel.”

Considering the idea of 20-minute communities, as referenced in the IPPR report, 88 percent of Scotland’s Climate Assembly agreed: “Realise the principles of a ‘20-minute community’ in flexible ways across Scotland by reducing the need to travel for work, shopping, services and recreation in ways that support localised living.”

Within that, they wanted investment in improving public spaces to make them safer and more appealing to walk and cycle in. They also called for reformation of planning laws to prevent collections of houses from being built with no amenities.

Among the 81 wide-ranging policy recommendations, the Assembly also calls for an acceleration of plans to mandate zero tailpipe emissions for all public service vehicles, and an increase in road tax to subsidise public transport and limit car ownership, recognising the need to phase in such measures to avoid disadvantaging those currently dependent on a car.

Assembly member, Alistair said: “Even although I am a keen motorist, I can see the need to reduce private
car ownership and move towards greater use of public transport. I know that for most types of transport,
there are much greener alternatives which we need to exploit much more rapidly than we are doing now.”